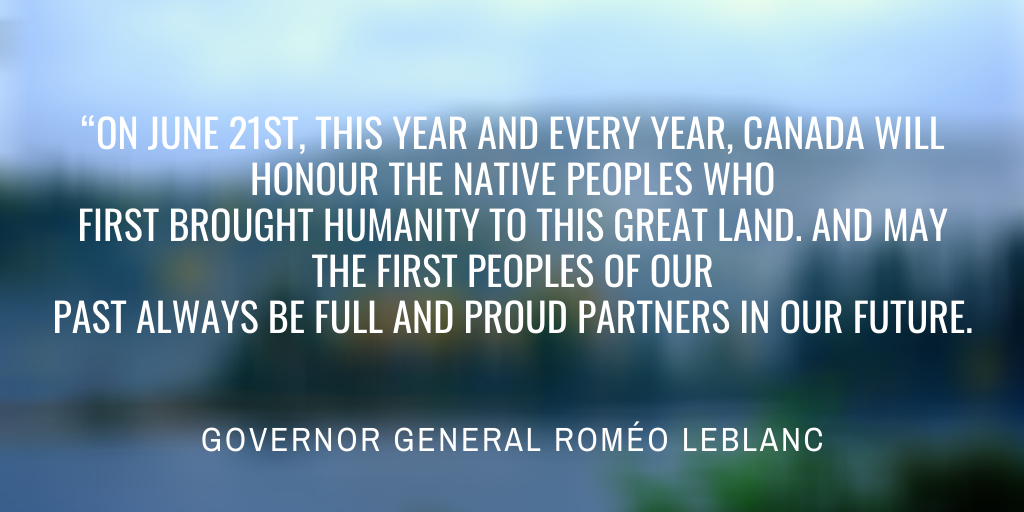 With the conversation about racial equality now dominating our news cycle, the timing of National Indigenous Peoples Day couldn’t be more appropriate. June 21st is a day to celebrate the unique heritage and diverse cultures of our three Aboriginal groups: the First Nations, Inuit, and Métis peoples. It is also a time to recognize the outstanding achievements and contributions they have made to this nation.

More locally, let me also recognize that the communities of Aurora and Newmarket are situated on the traditional territories of the Wendat, the Haudenosaunee, and the Anishinaabe peoples, whose presence here continues. We honour and acknowledge this land and its people.

This celebration was formerly known as Aboriginal Peoples Day, but in 1996 was renamed. As then Governor General Roméo LeBlanc noted: “On June 21st, this year and every year, Canada will honour the native peoples who first brought humanity to this great land. And may the first peoples of our past always be full and proud partners in our future.”

Like so many recent events, Canada’s National Indigenous Peoples Day will be celebrated differently this year. But that does not mean the opportunity to enjoy, to learn and to support Indigenous heritage and culture is lost. You can participate online. Summersolsticefestivals.ca (on until June 21), includes education days, arts and crafts, culinary, family and culture, and live music and dance. What a great way to enhance our understanding and appreciation!

Celebrations are wonderful, but recent tragic events have demonstrated that our nation still has much work to do in terms of racial equality. Prime Minister Trudeau acknowledged on Thursday that a disproportionate number of Indigenous people are subject to the use of force by police services (including the RCMP), as he promised “strong, bold” actions to address systemic racism in policing and elsewhere.

I strongly support his promise and his plan to be part of the solution. To that end, I’ve committed to renewing my understanding of the report issued by The Truth and Reconciliation Commission of Canada. I am also taking a Personal Pledge of Reconciliation, and would encourage all Canadians to consider doing so.

So in addition to Father’s Day, I’ll be celebrating National Indigenous Peoples Day – the latter one virtually. I hope you will join in and watch a documentary, perhaps an Indigenous film, or read a book by a long list of outstanding authors.

Let’s all explore Indigenous culture and learn more about their history. Our future as a nation will be richer for the experience.

OFFICE HOURS: In order to help reduce the spread of COVID-19, our offices will be closed. For inquiries and assistance, I can be reached by e-mail at Tony.VanBynen@parl.gc.ca or by phone 905-953-7515. For COVID-19 updates click here